VietNamNet Bridge – From October 1, Vietnam Railways Corporation (VNR) will start to sell train tickets for the upcoming Lunar New Year holiday (Tet), with fares for the Hanoi-HCMC services 2-15% lower than the previous Tet. 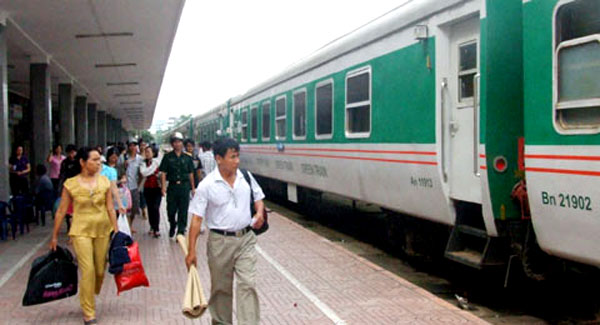 The fare sale program for Tet was announced on September 22 by Saigon Railway Transport One Member Co. Ltd. The company said passengers will get e-tickets after they have paid for their online bookings instead of having to queue at the departure stations to receive print tickets like in previous years.

The company’s deputy director Dinh Van Sang said there will be 15,000 train tickets for the nine-day peak period of Tet next year. Of which, trains will offer 12,000 seats a day for the Hanoi-HCMC services with fare decreases of 2-15% compared to last Tet.

However, fares will rise by 3-5% for shorter trips from HCMC to Phan Thiet, Thap Cham, Nha Trang, Quang Ngai and Hue, and 3,000 daily seats will be available for trains on these routes.

Replying to the Daily’s question about solutions to solve online booking congestion as in previous years, Sang said such an incident would not occur this year as the booking system will be able handle two million visitors at a time compared to 60,000 last year.

Sang said in the first half of October, 90% of the total train tickets will be sold for the Hanoi-HCMC route and only 10% for shorter routes. In the following 40 days, the percentage of tickets for shorter routes will rise to 21% and then 48%.

Each passenger will be allowed to book a maximum of four tickets online for one route. Passengers can settle payments online, at designated post offices and banks or at railway stations nationwide within 24 hours after bookings are made.

Besides online bookings and payments, the railway sector will also sell tickets at Saigon Railway Station and five points outside the station for passengers. There will be sales points for train tickets in the provinces of Dong Nai and Binh Duong.

Passengers must register their names and identification card numbers when they make bookings. They should provide correct names and ID numbers for change to tickets.